Walking Across The Divide

This weekend, Jan, Anna and I had the rare opportunity of ministering together at the Crescent City Foursquare Church in Crescent City, California. While Anna was conducting a Prophetic Art Workshop with Jan, I took the opportunity to spend the day in the city walking and praying.  I was scheduled to speak at the evening service later in the day.

As I walked along the coastline, I saw in the distance the Battery Point Lighthouse. Built in 1856, it was one of the first lighthouses on the California coast. A sign said it was only accessible if the tide permitted. It was now low tide so the rocks of the exposed seafloor between the lighthouse and shore were visible.  The only way to get to the lighthouse was to walk across the exposed seafloor. So off I went hiking across kelp, moss and slippery rocks.

While I know tides don’t rush in quickly, I was still a bit uneasy walking across the wet rocks out to the lighthouse. I was hoping I would not experience what the news would report later that day, “Breaking News! A rare and unexpected returning tide has left tourists trapped at the Battery Point Lighthouse awaiting rescue. Stay tuned as details of the rescue emerge.”  I also had images of my host pastor, Roger Bodenstab, looking at his watch wondering why his guest speaker was late for the evening service. 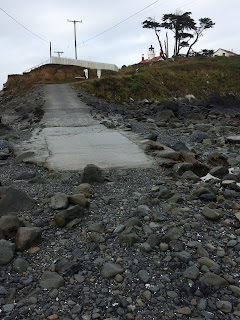 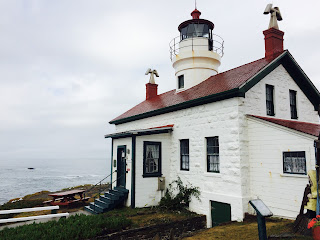 As I walked out to the lighthouse I felt the Lord was using that moment as an illustration of what is taking place in this moment of a slack tide in the spiritual realm.  I stopped and took a picture from the seabed looking out toward the lighthouse in the distance. The photo captured the isolation that comes when sorrow and unease drain a culture of its excuses to not discuss the real reasons why we are so divided. The recent tragedies in America have left many things exposed that were covered during the full tide of life.  In this moment of exposure, God is revealing new ways to approach each other that before seemed distant, isolated and impossible. We have a rare opportunity to stand together if we are willing to walk across the exposed ground that has separated our lives.

In the coming days some of you will stand before people and institutions that previously would have not allowed you to approach. The pain and the heartbreak you see has drained away their prohibitions.  You will see before you a pathway leading to critical conversations that were hidden beneath the stormy dialogue of racial division and separation.

This is a time for you to walk out and engage these conversations with grace and mercy. Lead with you heart, not with your head and you will have conversations you never thought possible.  Standing together in this Spirit-led dialogue you will become a warning signal to those approaching a similar season somewhere in the future on how to avoid the hidden reefs that were embedded in your history and almost shipwrecked your culture.

Posted by Garris Elkins at 7:14 AM