The Steel of Healthy Relationships 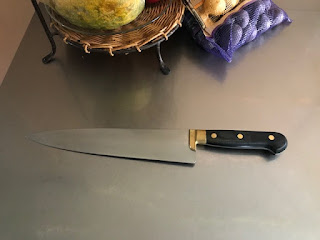 One of my favorite movies is Robin Hood: Prince of Thieves. In the film, Morgan Freeman plays Azeem a Moorish warrior who is a companion to Robin Hood played by Kevin Costner. In one scene attention is drawn to the sword carried by Azeem. He comments it was made from the finest Toledo steel, referring to Toledo, Spain. For centuries the small city of Toledo produced some of the most battle-worthy swords in the world. They were known for their strength and durability in combat. “Toledo steel” meant a sword made of layered steel with an iron core. This gave the sword flexibility without breaking in battle.

When Jan and I lived in Europe, we traveled through Spain several times. On one trip, we visited Toledo. A goal of mine was to purchase a chef’s knife made by the craftsmen in one of the Toledo cutlery shops. The knife in the attached photo is that knife. I have been using it for over twenty years. It is of such quality that it appears to never have been sharpened though it has many times. It will last the rest of my life because of the quality of material and craftsmanship.

Posted by Garris Elkins at 6:19 AM