The Vanishing Remnants of a Painful Season 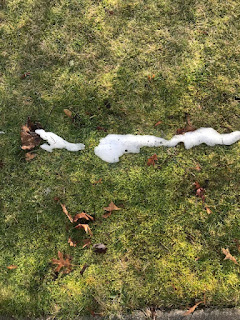 I walked out into our front yard and saw the remnant of a major snowstorm that hit our area last week. The storm was so severe and impacting that the governor of Oregon declared parts of western Oregon a disaster area. Tens of thousands of people were left without power. Many still have no electricity. Roads were closed because of downed trees and power lines. For a time, Interstate 5, the major north-south freeway connecting the west coast was shut down. It was a mess. As I stood over the last sliver of evidence from that storm in bright warmth of a spring day, it looked small, insignificant and melting. Later in the day, it was completely gone.

A storm of a relationship or an exhausting season of life can be like the snowstorm. It was not planned and struck your life leaving devastation in its wake.  The remains of the trauma are still around even though the initial storm has passed. The Lord wants to remind you that like the sliver of snow on my front lawn, under the power and warmth of God’s presence even the remnants of what was such a devastating experience will soon be gone.

The physical evidence of your painful season will become only a memory if God is allowed to lead you out of the destructive aftermath. You might be standing knee deep in the snow of a personal storm. You are cold and it feels like the power to sustain your life has been cut off. You need to know this storm was a season, not a life sentence. Spring is coming. Your spiritual climate will change in the coming days.

As you experience this change of seasons, God will be faithful to melt the remaining painful evidence left behind by the storm. There will soon come a day when, in the Spirit, you will stand over the last remaining remnant of your life-storm. It will be for you like it was for me standing over the last remnant of our storm. You will see the remnant melting before your eyes. On that day the Lord will say, “Spiritual spring has come. Your winter is over. I have removed the last remnant of your devastation. A new season has arrived.”

Posted by Garris Elkins at 5:20 AM