It Will Still Pour 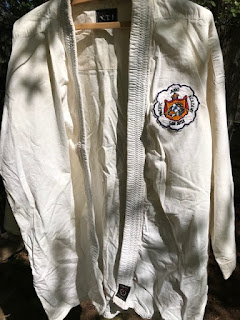 My daughter, Anna, was rummaging through some old clothes kept in storage and came across a karate gi (uniform) that I wore as a young 20-something when I trained at the historic  Pacific Judo Academy in San Jose, California under the legendary Sensei, Bill Montero. As a teenager, I was on a fighting team for a different martial art - a Chinese style called Kenpo. This dojo (studio) was Japanese. At the Pacific Judo Academy, I was not in a formal Judo class. I was training in an early version of what we would call today, mixed martial arts – a mixture of Shotokan karate, ju-jitsu, judo, aikido, and bokken stick fighting.

For a year, it seemed as if I lived in the dojo. I trained for several hours a day on most days of the week. Sensei Montero was a respected man as was the history of his dojo. He was also respected because he had advanced black belts in multiple styles and because he pressed his students to strive for excellence through hard work and lots of sweat.

When I held the old gi in my hand after not seeing it for almost 50 years, I closely examined it. I noticed old sweat stains from my youth and a frayed collar from repeated use. Those images brought back memories of the sounds of falling to the mat after being thrown or throwing someone in a takedown. I heard the sounds of thousands upon thousands of kicks and punches. I recalled the thrusts and strikes I made with my bokken fighting stick. I still have that original bokken. It rests against the wall alongside our bed in our master bedroom.

The frayed collar and stains are a reminder of my investment in time, energy and personal resources. Some of you are like me and my old gi. You are far removed from a season of significant investment of your time, energy and resources. While those investments are somewhere in your distant past, in God’s Kingdom, none of your labor of love is ever lost. It can be recalled when needed. You might have become rusty in its exercise over time, but God has a way of calling something forward in time and having it work in the present.

I remember the day when I asked Sensei Montero what happens years in the future after people had stopped training. I asked if what we learned would waste away over time. He said, “Martial arts are like a teapot that holds hot tea. Over time, the tea becomes cold, but it can still be poured.” The same is true for the investments of faith you made in your life in seasons past.  When the time comes they will pour out when needed as called forth by the Spirit. With God, nothing we do for Him is ever lost. It is simply stored away for a time in the future when it is needed. At that time, it will pour.
Posted by Garris Elkins at 6:21 AM

A New Book - The Sound of Reformation

A reformation is taking place in the Church. In this reformation we will rediscover the simplicity of our mission and calling. In The Sound of Reformation, Garris explores the purpose and product of the five equipping gifts found in Ephesians 4 then links the impact of that training and equipping to a unique place on the 7 Mountains of cultural influence. As you read this book you will rediscover the beauty and transforming power of a simple faith.