Digging Deeper into Your History 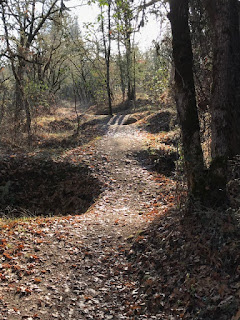 While walking along a trail, I sensed a nudge to turn around and face into the sun. When I turned around, I saw where I had just hiked. The sun was reflecting off the leaves, giving the path a faint glow. This is a historic mining area called Rich Gulch. It is lined with glory holes.

A glory hole is a small hand-dug pit created in the 1850s by gold prospectors looking for surface gold and financial glory. They dug these holes with pick and shovel and quickly moved on. We are told only 10% of the gold was found using this method and that more still exists under these shallow pits. After taking the photo, I turned back around and continued my hike. Then the Lord began to speak.

Don’t be quick to dismiss what lies beneath the recent surface activity in your life that produced little results. You quickly worked over an area of undiscovered relational and spiritual treasure and moved on. You left behind a lot of blood, sweat, and tears. The thought of returning and working the claim again has no appeal. If the Lord asks you to return to what you have defined and dismissed as a failure, do not let the fatiguing memory of your past efforts or a lack of faith stop you from returning and digging deeper this time around.  A mother lode of revelation and glory awaits your obedience.

Posted by Garris Elkins at 5:51 AM